Fluco Straps: A Good German Made Aftermarket Strap Company With Plenty Of Options

Orange, gray, and green to brighten up your week!

As I’ve grown older and my wrist has grown hairier, I’ve become more and concerned with what I use to cover it. Watch straps are a hobby within a hobby and it was one that took some time to reveal itself to me. When I was a young collector, I trusted brands a bit too much. I assumed that no watch head would ever look better on any other strap than the one its designers intended for it. Subjective as this conclusion may be, I believe myself to have been wrong. Now, I take great pleasure in seeking out new brands that have the ability to liven up my collection. One such brand is German maker Fluco.

What do I like about Fluco? Well, it starts with the quality. For me, that will always be the case when we’re talking about straps. It’s no good having something that “looks” great but feels awful because of the cheap and nasty way it’s made. That’s the kind of rubbish you end up with on your wrist if you follow the advice of those fly-by-night influencers on Instagram. I’m sure you know the type: too polished to be legit. No, this well-established German strap brand distinguishes itself with a range of impressively cut and finished straps in a variety of colors and materials. 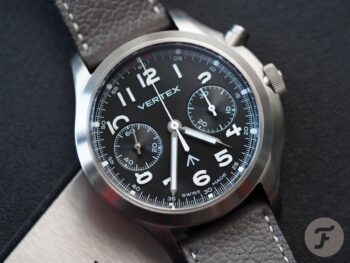 My subject for this article today is the Vertex MP45 Chronograph. It is a versatile, military-inspired compur chronograph with a 20mm lug width. I chose it to carry the three Fluco straps I want to show you today because it boasts a larger neutral colorway. The only pop of vibrance comes in the form of two red dots on either side of the 12 o’clock marker. In my opinion, the red dots look very nice against the grey and green straps and really take things to a new level when paired with the orange calf also. 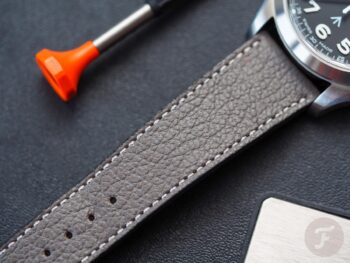 Okay, I took three straps for today’s review and wore them for one week each. The following are my short-term takeaways. Regarding the long-term experience with these straps from Fluco, I have one of the Hunter Rally style straps in dark chestnut brown that I’ve worn on my Echo/Neutra Cortina chronograph for about six months, and that one looks fantastic. It is supple and aged nicely but it is possible its darker color (and more rugged character in general) is to thank for that. 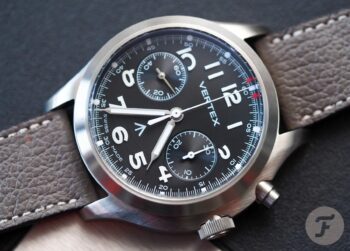 To begin with, I put the gray Deauville strap (calf) on the Vertex. This is the most muted of the three I took in for review, but consequently the most versatile. It could work with pretty much any watch head (and would look incredibly sharp on an array of Speedmasters. I actually noted how this strap seems to take on chromatic characteristics of its surroundings (which is in stark contrast to the orange version of the same strap I will get to further down the page). 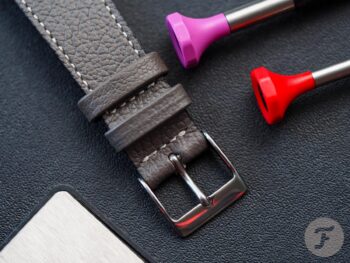 When I wore the gray on the black-dialed Vertex, it seemed much colder. Conversely, when I lay it next to my NOMOS Orion De Stijl (unfortunately a 19mm lug width that could have accepted this 20mm strap given its concave lugs, but potentially without damage), it looked much browner (and more like the “taupe” model you can find in the online shop currently). The Deauville straps are made from shrunken calf leather, which gives them a very attractive surface pattern. They are less uniform than pebble grain but much more interested (and far less overbearing, in my opinion). 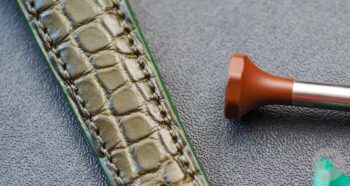 This one was a funky choice. I went for an olive frosted Lousiana Alligator strap. It was easily the most ambitious of the three I received and, in some ways, wound up being my favorite. It only works in certain contexts, however. The watch you wear it on should have at least some kind of classicism about it. That’s not to say it has to be a thin dress watch (the generously padded strap is between 2.5mm and 3mm thick so it might even be a bit much for a true dress watch), but whatever you pair it with should have an incredibly strong design language, send a clear message, and not be too busy. The Vertex is fine. A vintage Speedmaster Moonwatch would work also. Something like an Omega Seamaster 300M, however, wouldn’t look right at all. 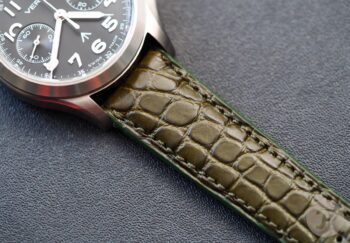 It was the stiffest out of the box but softened up nicely after a few days’ wear. This was the longest strap of the three and I found it to be loose on the last hole. My 16.5cm wrist had no problem with the two Deauville straps, but be mindful of this one’s length if you’re slim-wristed like me. This strap, like all the brand’s reptile straps, is issued with an IRV certificate to show preservation of the animal is being observed. This leather is tanned in Italy by experts in the craft. And you know what? It really shows… 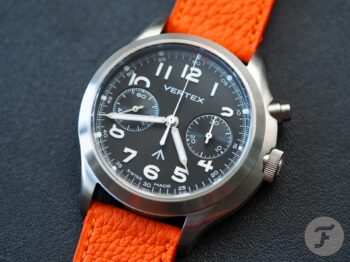 The orange Deauville you’ve all been waiting for

Even though I’d never encountered Deauville leather before, I took to it immediately. In fact, I started to feel so comfortable in its presence, I quickly decided the orange version was what I’d been missing in my life. I’d be lying if I said I stuck this one on the Vertex and left it there for very long. I shared it around most of my 20mm lug-width watches including the aforementioned Cortina, my broad arrow Speedy, a couple of Seikos, and even a Casio Surftimer (which looked atrocious but was a lot of fun to see). 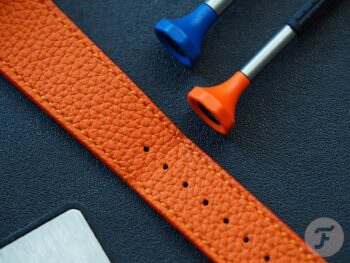 As with the other two straps in this review, the 20mm measurement at the lugs tapers to 16mm at the buckle. I took all three with stainless steel buckles and quick release spring bars, which, these days, seems a no-brainer for the handful of Euros more it tends to cost (it is especially useful for watch reviewers, as I’m sure you can imagine). I used to be really skeptical of the strength of quick-release straps, but barring some obviously sub-standard exceptions, I’ve never had cause to worry. The same was true here. The Fluco straps feel tough and hard-wearing despite the more extravagant aesthetics of some. 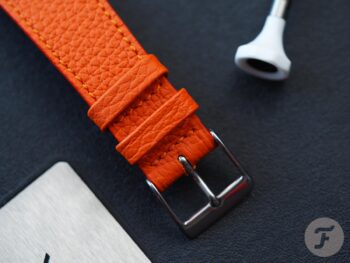